With us working on our new website, we have the opportunity to relook at some of the projects we did over the past 15 years so here’s the 1938 BMW 327/28 Cabriolet that made it all the way to Pebble Beach Concourse d’Elegance Motoring Event.

The car came in all pulled apart to the bare shell, with a mandate of being a competitive TSD Rally car, yet make it to the grass at Pebble Beach Concourse d’Elegance.
Only 200 of these cars were built in 1938 so parts are pretty-much impossible to find. With the exception of the engine, only 35 parts were available and of those, only half actually worked on the car. They came from all over the world, from places like Czechoslovakia, Germany, Britain, USA, etc.
We repaired or hand built everything else that was not available. We fabricated almost half the body, the entire wooden structure was redone in metal, but it still looked exactly the same shape and contour of the wood, custom springs with modern metallurgy yet looked completely stock, etc.
It took 6000 hours to bring it to where it needed to be but in the end, the client ended up with a one-off piece of driving art that is referred to as the best condition 1938 BMW 327/28 Cabriolet in the world.
Truth be told, it is a full-blown hotrod posing as a stock restoration or a wolf in sheep’s clothing and it drove like a dream, but that’s a story for another day.
The trans is now a synchromesh 4 speed with electric overdrive with a “hidden switch” that was hidden in plain sight yet no car show judges noticed it, the electrical was redone to 12 volts, with an alternator hiding in the original generator case. It had plug ins for rally instruments, a charger, all hidden behind panels under the dash. Proper LED headlights and taillights that were as bright as a modern vehicle. We updated the brakes, the suspension and the steering yet it all looked completely stock. The extra 50 more horsepower was a major achievement with modern head porting, bumping up the compression ratio, Balancing & Blueprinting the engine, a proper high performance tune on the 3 carbs, etc.
First up was the Kirkland Concourse show, and several others of its caliber. Taking top honours at each got it the invite to the Hilton Head Concourse, which is one of the top concourse shows in North America. At that event it beat out the BMW museum entry from Munich to take top honours. Even with the BMW museum staff from Munich being in the judge’s group, they never saw the modifications.
This is something we’ll never forget; it was a major accomplishment and the client couldn’t have been prouder and more pleased with the build. It was such a major win that the clients wouldn’t go to accept the prize unless Ewald (owner at Jellybean AutoCrafters), was in the car to be honoured with the build at center stage, infront of all the cameras and attendees.
This is just one of the many great clients we’ve had over these past 15 years. Great people that share their successes with the ones who helped make it happen. These are outstanding folks.
The big win at Hilton Head paved the way for the invite to Pebble Beach Concourse d’Elegance, which was the goal from the onset. A completely stock looking, custom hotrod, stood proud among the best of the best concourse vehicles in the world and holding its head high.

A big thank you to Andrew Holliday for some of these great pictures.

There is some great talent here on the West Coast of Canada and we are proud to be a part, of the high-end car scene here.
Today we are honoured to have Kurt and Ewald Penner’s picture beside the 1938 BMW 327/28 Cabriolet we restored, in the Province Newspaper’s Driving section today as a promotion for all the car events that will happen this week, so thank you Cam Hutchins for a great photo that was taken in Carmel, California at the Pebble Beach Concourse d’Elegance Event and also for including it in your article today.
This 1938 BMW 327/28 Cabriolet came in completely disassembled and in very rough shape so we rebuilt it to better than new standards, so it’d fit in well and “Be At Home”, the top concourse show in North America.
A great client and a great car, we are pleased that we were chosen for such an iconic build. 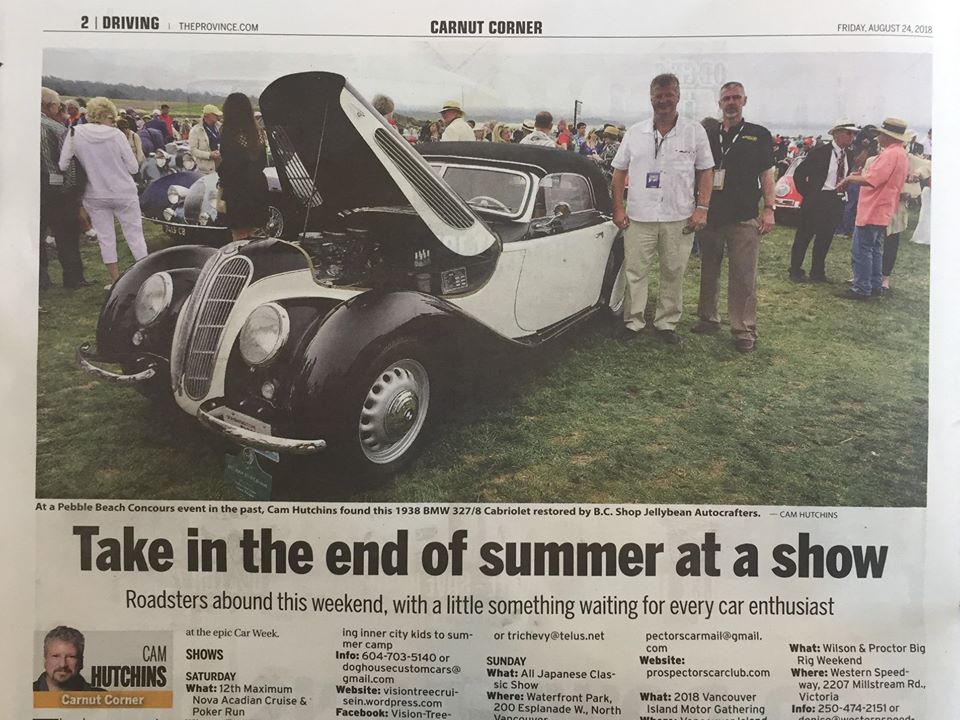