T Buckets have got to be the essence of the hotrod world, whether you like them or not they encompass the bare bones, go fast, white knuckle rides we all enjoy. Put the hammer down on this baby & it’s an instant adrenaline rush with the tires smoking, your going sideways down the road as your holding on for dear life & popping it into second for stage two of fulfilling the basic need for speed. A few blasts and you’ve received the therapy you need or you now need the therapy you didn’t need. Either way, what a blast to drive.

Safety is always of utmost concern at Jellybean AutoCratfers so when this T Bucket came in we went to work on those concerns first. A new frame was designed, engineered & built in house, even the brackets and mount were handbuilt. Perfect fitment of all pieces with visible tig welds make the frame a feature on this wild ride. The customer also wanted a more humane ride with better creature comforts so considerations were taken during the build to the steering shaft angle giving the steering wheel more clearance to the top of the door. Doing this allowed even a tall person to steer the car without trapping his hand between the door & his leg during a turn. Speaking of door, most T Buckets do not have a driver’s door. We cut the body open & extended the passenger door by 4″ and fabricated a driver’s door to match making it much easier to get in & out. The addition of a stereo forced the need for a new dash. Check out the new design which is all hand built, we kept an old school look with a modern design & structure.

The body was done in a high-gloss black which stands off nicely to the semi-gloss black frame & “speckled” suspension arms. The interior is done in a “worn leather” look while the wheels were polished & 12″ wide radials out back.

This is a totally hand built vehicle with the exception of the body which was heavily modified as well. 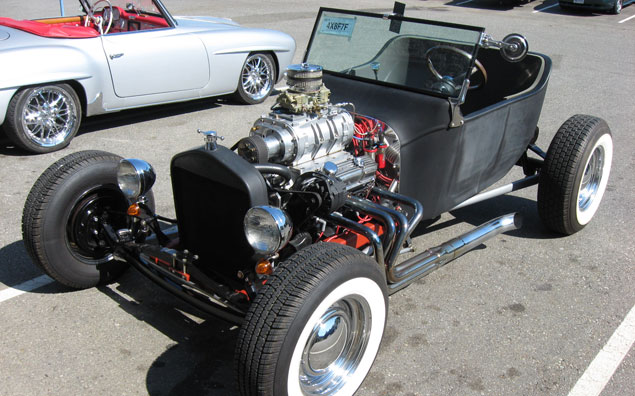