Before the Muscle Car era started a few vehicles were at the top of the world, when the first Corvettes hit the market they were unlike anything people had seen before. This ’57 example boasts a factory fuel injected small block and a 4 speed transmission, both of which were almost unheard of in that day.

The owner is doing all the mechanicals himself and is having us treat the body to a full spa treatment. Our mandate is to have it give honour to its history but in a modern interpretation. The straightness, the gaps & the lines were refined to a respectable level so now that paint is on, it is headlong above the rest.

This injected Corvette came in with some issues in the fiberglass which had been repaired to a substandard level that became evident when we stripped the 7 layers of old paint off of it. Once the concerns were dealt with it was on to the sealers & fillers. Our work gets sealers at different levels to ensure the paint remains as nice in the years to come as when it rolls out of our shop. A “perfect” paintjob is only as good as its foundation. It does carry a price but the longevity well outweighs the cost. 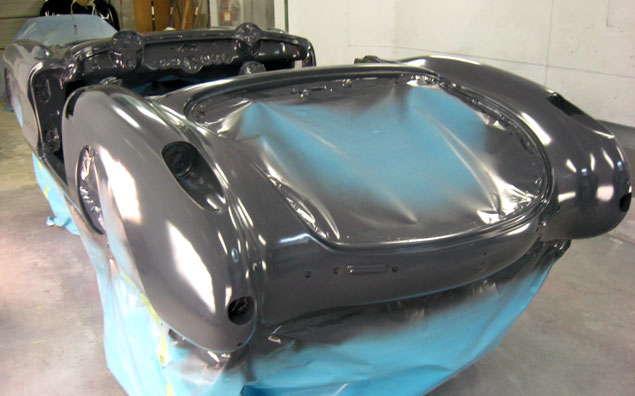