The Austin 7 which was produced from 1920’s to the late 1930’s was one of the most popular cars ever produced for the British. It made a major impact on the small car manufacturers of the day, so much so that the very first BMW (Dixie), the American Austin’s were actually licensed Austin 7’s. Nissan used the Austin 7 design without license to produce their first cars as well.

The early Austin’s had 7 horsepower, hence the Austin 7 name but this example being a 1936 already had the 18 horsepower engine which is coupled to a 4 speed manual transmission. The 7’s shared the same frame & mechanicals but were made in a variety of body styles with this one being the Ruby body.

It came to Jellybean Autocrafters with a body needing desperate attention so it was stripped to bare metal & all the rust and the previous poor repairs replaced with new metal. Body parts are not available for it so each piece needed to be hand built by our craftsmen. Once the body was in the condition it needed to be the original colour green was applied and the interior was freshened up with new panels, carpeting and headliner.

The Ruby has a tall roof so 4 people car sit comfortably inside so the client will enjoy this example for many years to come. 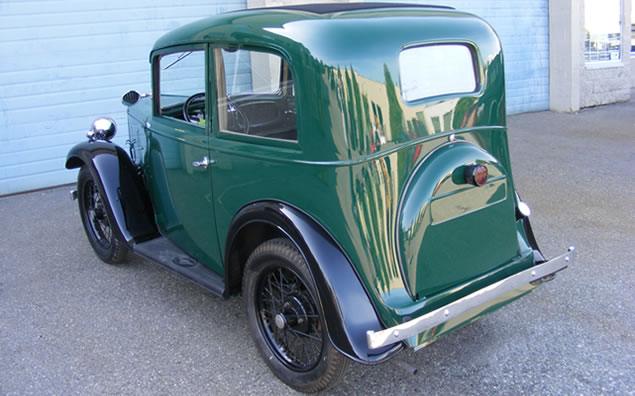