Carrol Shelby was a major icon in the car racing world since the early 60’s so his passing last year leaves a major hole in the industry. He is and will be missed by all who knew him. For Jellybean AutoCrafters it is a real privilage to perform a concourse restoration on this 1967 Mustang Shelby GT350 in his honour.

In the mid ’70’s this GT350 became a road race car with flares, a turbo & intercoolers, 4 wheel disc brakes, etc but our client who lives in Scotland set the mandate to bring it back to stock/concourse condition.

Much of the work on this vehicle is on the sheetmetal so Kurt (one of the top metal guys in BC) has had his hands full. Most body panels are available for the Mustangs but they do not fit well enough to meet the standards of Jellybean so they all needed reshaping and some reconstructing to suit the build. The original fiberglass parts also never fit properly even when the car was new so John, our bodyman/painter has shown his skills making them fit perfectly. He is also one of the top painters in BC so the paintwork on this GT350 will be stunning.

The final product will have its original numbers matching 289 engine, 4 speed transmission and differential along with all rebuilt suspension & interior. 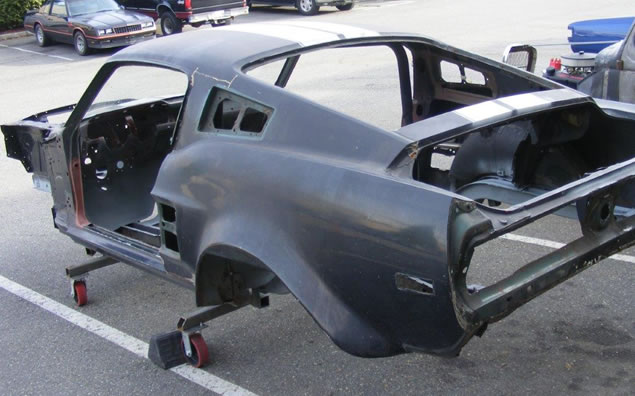